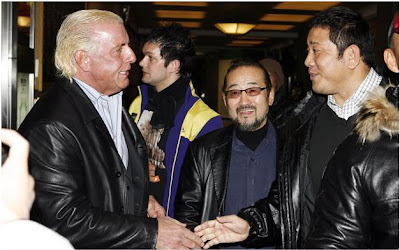 In a show of either ignorance or disrespect, the World Wrestling Entertainment labeled New Japan Pro Wrestling stars as fans? Is this a non-story? Pretty much. Ric Flair was greeted by “fans” known to New Japan followers as Yuji Nagata, Hiroshi Tanahashi, Ref Tiger Hattori, and Prince Devitt. Some have speculated that since TNA has developed this relationship with the newly NWA Sanctioned, New Japan Pro Wrestling, WWE decided to take a shot at both parties. Obviously any NJPW wrestlers would have respect for Ric Flair. But its sad that WWE doesn’t acknowledge these fine athletes.