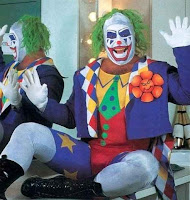 Doink is a name known around the world as the Mischievous Clown who wreaked havoc from pillar to post for the WWE in the early 90s, but the man behind the paint has wrestled all across the world gaining championships with Jeff Jarret, Buzz Sawyer, Ron Simmons, Ted Dibiase and lot more.  Making a name for himself in Mid-South Wrestling, World Class Championship Wrestling, WCW, and even ECW.  The 30 Year Veteran of pro-wrestling is scheduled to battled Tom Donovan at the Parade of Champions.  Donovan threatened to end the career of Doink. Joining the Alliance, Doink will talk about his storied career in and out of the NWA, what went down during his recent match with Hacksaw Jim Duggan,  his return to NWA Southwest and of course what does he have in mind for Tom Donovan.

Come listen to the show at:

http://www.blogtalkradio.com/alliance-wrestling
Call in Info (646) 478-3019
About: www.alliance-wrestling.com, founded in 2007, Alliance-Wrestling.com has become the premier  source of information about the National Wrestling Alliance.  Alliance-Wrestling  reports on the entirety of the NWA in the United States, Canada, Australia, France, Scotland, Mexico, Japan, and Korea.  The  Alliance-Wrestling reports news, rumors, live event results, up-coming event information, interviews, and videos. Alliance Radio is  the official podcast of Alliance-Wrestling.com that features interviews of those in the know of the NWA.  Past guests include; NWA Worlds Champion Adam Pearce, NWA National Champion Phil Shatter, NWA Executive Director Bob Trobich, former WWE Superstar Lance Cade, and. Former NWA North American Champion Tommy Cairo.
You can stay social with Alliance Wrestling on Facebook and Twitter