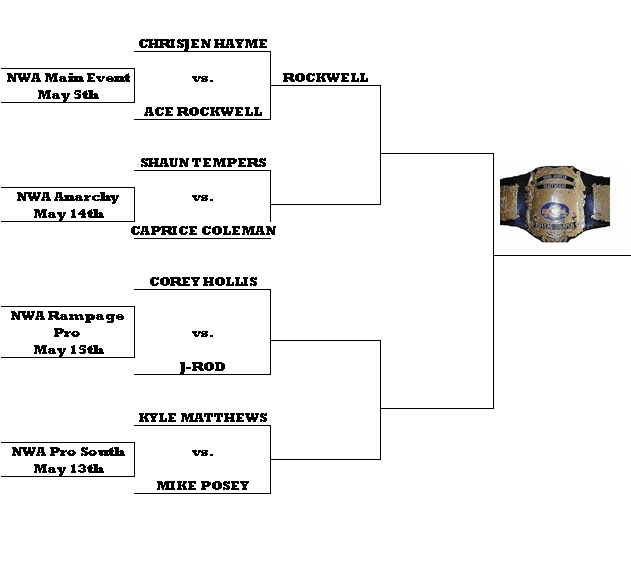 The North American Title Tournament kicked off last weekend when NWA Southern Heavyweight Champion Ace Rockwell defeated Chrisjen Hayme at the confines NWA Main Event.  This so far as been the only bit of news regarding the tournament that has been released as of late.  That and that Kyle Matthews will be taking on Mike Posey for NWA Pro South.

There is a lot of unanswered questions about this tournament.  The bracket to the left is simply our best guess as to what direction the Tournament is following.  Obviously the Tournament can be much larger, but so far these are the matches that have been announced.
The first edition of Talk NWA on Blog Talk Radio focused on whom the fans of the NWA would select for the tournament.  Guys like Ja’coby Boykins and NWA Texas Champion Lance Hoyt have lobbied via Twitter to be included in the tournament.  Even promoter Gabe Ramirez expressed interest in having wrestlers from Revolution Pro Wrestling.  However, the tournament planners are keeping all information regarding the tournament close to the chest and the NWA Faithful have to just guess what happens next in the tournament for to crown a new North American Championship.