United Wrestling Network’s Championship Wrestling is coming to Oxnard Levity on April 21, 2022 and what a Main Event they have in store! 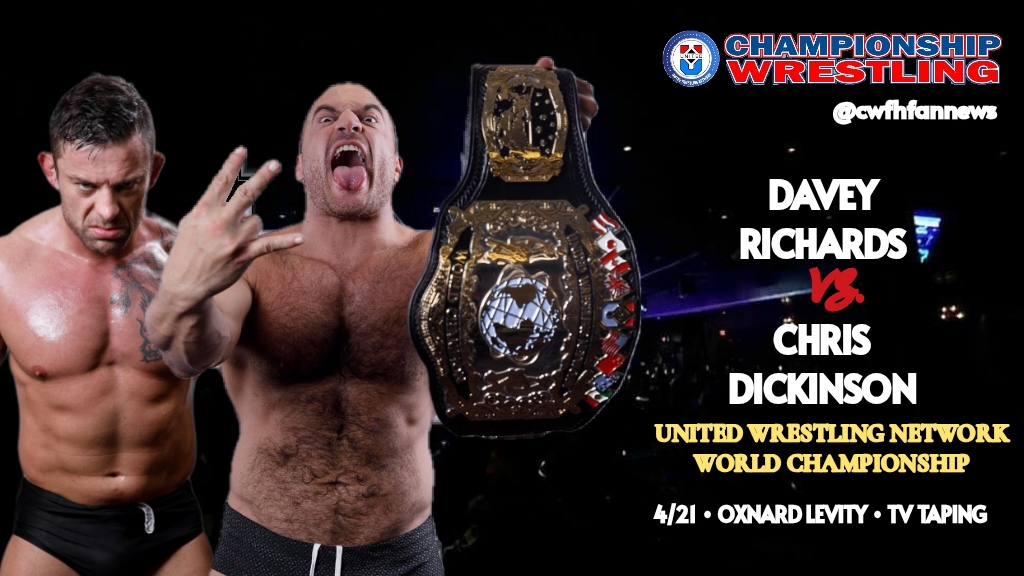 Chris Dickinson made his in-ring return from a hip injury – which he substained at NJPW Strong Battle In The Valley – on WrestleMania weekend and defeated the likes of NJPW’s Minoru Suzuki at Bloodsport and NWA Worlds Heavyweight Champion Matt Cardona at Game Changer Wrestling – Joey Janela’s Spring Break 6 Part 2 “The Greatest Clusterfuck”. The Dirty Daddy also defended the World Title – prior his injury – against Manders on Championship Wrestling From Hollywood last year.

Davey Richards made his MLW debut last year and has been on fire since then. Not only does The American Wolf kill it on the Indies; he won the prestigeous Opera Cup in MLW! Despite his unsuccessful attempt to win the World Title from Alexander Hammerstone and lost to new No. 1 Contender Richard Holliday, Richards defeated United Wrestling Network Standout Danny Limelight – who is also signed to MLW as part of 5150 and recently lost the World Tag Team Titles to EJ Nduka & Calvin Tankman – at the Azteca Underground TV Taping at WrestleMania Weekend.

They both are no strangers to another as they both faced each other years ago in Combat Zone Wrestling: Cage Of Death XV.

Can Dickinson made it V2 or will Richards become the 2nd United Wrestling Network World Champion? Tickets for the 4/21 TV Tapings are on sale now!