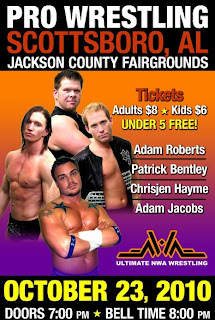 With alot of inter-changable parts with NWA Anarchy, Ultimate NWA out of Alabama is another Southern NWA promotion that is well worth checking out… And, Dan Wilson’s Devil’s Rejects stable out of the Compound raises plenty of hell here as they do in Georgia. Recently, The Rejects decided to attack U-NWA referee Justin Envy and U-NWA ring announcer Scott Hensley…The two Adams, ‘All That’ Adam Jacobs and Adam Roberts ran down and tried, in vain, to make the save. Jacobs recieved a savage beating at the hands of the Rejects as his running mate, Adam Roberts could only look on as he was hand-cuffed to the ring. This is the selling point for the Ultimate NWA show coming up on October 23rd, in Scottsboro,AL at the Jackson County Fairgrounds…Before this comes to a head in Scottsboro, though, Tomorrow night at Sparkman Civic Center in Hartselle, Al, the Ultimate NWA crew will be action there with a bell-time of 8 pm est. Just a few days removed from the events that led to Patrick Bentley re-joining the Rejects and then the Rejects coming to full force with the addition of the debuting Rufus Black, this should make for a very interesting time in the Ultimate NWA….