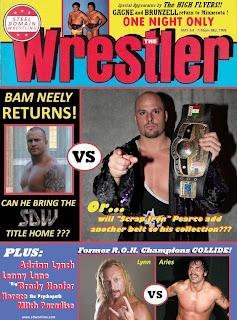 The National Wrestling Alliance Worlds Heavyweight Champion was a very special guest for the Alliance-Wrestling Radio, back in March.  Coming off the heels of a successful attempt to become the three time Worlds Champion, I spoke to Pearce at length about his past reigns and his up-coming schedule.  Pearce flat out said he would take on anyone, anywhere and that he would be a fighting champion. Pearce was made aware of the challenge presented to him by Tommy Wilson of NWA Pro Wrestling’s SoCal Pro Wrestling during the show.  Without any hesitation, Pearce agreed to fight Wilson. Pearce did  go to Oceanside California, April 17th and defeated Wilson.  Also during the show, Pearce made mention he would be in Minnesota on May 1st.  And Alliance-Wrestling.com was made aware by Mach 1 Officials that the Worlds Heavyweight Champion would be defending his title against Willie Mack.
When Pearce steps into the ring Saturday May 1st it will be in a non-NWA affiliated promotion, Steel Domain Wrestling.  Pearce had said he will take the NWA Worlds Heavyweight Championship anywhere to defend.  And with the blessing of the NWA Executive Director, Pearce will defend his championship against former WWE Superstar, Bam Neely.  This event will also feature two former ROH World Champions battling, Jerry Lynn and Austin Aries.
And two weeks later if Pearce is successful in Lakeville Minnesota, Pearce will travel to Anaheim to defend his World Championship.  This will mark the second time that “Scrap Iron” has defend the title in Anaheim for NWA Pro’s Mach 1 Pro Wrestling.  Pearce would defend his title against former NWA Heritage Champion TJ Perkins in of the earliest Mach 1 shows.  This time Adam Pearce will take on the Mach 1 Heavyweight Champion Willie Mack.
I’ve heard some speculation that the World Champion could be traveling to Arizona this summer for another big title defense and will return to Charlotte for NWA New Beginnings this August.  Its time for the NWA Members to book the Worlds Heavyweight Champion.