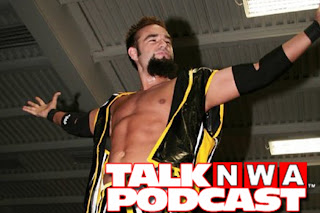 The Mempho Mofo has been building a reputation in Virigina for quite some time as one of the best.  A former Alpha Champion and reigning and defending  Continental Champion, Mark Bravura has become a staple in the Mid-Atlantic region.  Bravura has recently been feuding with “The Geordie Bulldog” Sean Denny over the Continental Title, a feud that has spanned many years in NWA Fusion over both of these championships.  On April 21st, NWA Fusion returns to action for the biggest professional wrestling event of the year in the state of Virginia, Shanghai Showdown on  at King and Queen Elementary School.  The Mempho Mofo defends the NWA Continental Title against Denny one more time.  We’ll also be speaking to the Mofo on his experiences teaming with Shaun Ricker in Future Stars of Wrestling, working matches for TNA Wrestling, and participating in the Team Taz Dojo.

What else should we talk about? Call in and you can decide.

(646) 478-3019
In association with www.alliance-wrestling.com, Talk NWA is a thirty minute live podcast for the fans of the NWA to discuss in real time, their views and opinion on the National Wrestling Alliance, along with providing the latest news and information from across the NWA.
If you need a Championship Belt for your Club Or Promotion, please visit www.ReplicaTitleBelts.com