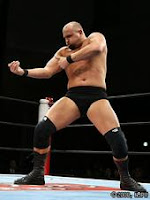 Its no surprise that the NWA is stacked with talent. Karl “The Machine Gun” Anderson is definitely one of those workers who has been able to compete at a higher level globally. In the last year Anderson has competed in multiple countries for the NWA. All over the United States, Ireland, Spain, Australia, Mexico, and now he’s officially made his way to Japan. I recently had a chance to share words with the Machine Gun and in this interview, we touch base on Anderson’s new career in the land of the rising son.

Jay Cal: Karl, first let me thank you for taking the time to do this interview with me. Your introduction to the New Japan fan base was on March 9th when you faced Koji Kanemoto in the New Japan Cup. Anyone who knows Kanemoto knows of his skill and technique. You battled Koji at the Aichi Perfectural Gymnasium in front of 7,500 fans. What was it like to do battle with one of New Japan’s Finest in front of that large crowd?

Machine Gun: Kanemoto is not just one of New Japan’s finest but one of the finest, WORLDWIDE, hands down. There is really no way to explain the honor that it was to debut for NJPW, let alone have my debut match be vs. Koji Kanemoto. To finally be in Japan, after all the hard work and all of the BULLSHIT that I had to go through to finally have this opportunity feels surreal. To perform in front of that kind of crowd vs. Kanemoto was a dream come true. I am living a dream right now, and I plan on the living this dream for a LONG TIME

Jay Cal: With one of the greatest World Wide in front of one of your largest crowds, was the experience over whelming?

Machine Gun: I wouldn’t say OVERWHELMING, but like I said, the experience was a bit surreal. To go from training my ASS off at the LA dojo for a year, and then leaving the LA dojo a year ago with my dreams crushed thinking I would never have the opportunity to go work for New Japan Pro Wrestling. And it all happened so fast. NJPW asked me if I was available, I said yes, and next thing I know, I have a contract in the mail and the travel agent is calling me about my flight! The experience was NOT at all overwhelming, it was FUCKING AMAZING!!!!

Jay Cal: Two days later you faced your long-time rival Prince Devitt and his RISE partners; Hirooki Goto and the former WWE star Giant Bernard. It was nearly 2 years to the day you defeated Devitt for his NWA British Commonwealth Championship, how was it stepping into the ring with Devitt?

Machine Gun: I am not gonna beat around the bush here, Devitt is one of my best friends in the World. And to be able to step in the ring with one of my best buddies on one of the BIGGEST STAGES of ALL, now that is fucking awesome…. 2 years to the day huh? Wow, 2 years to the day I BEAT that peice of crap Prince Devitt in a CLASSIC match in front of 8 fucking people at the dojo, and did it for FREE!! ha, how things have changed, no more FREEBIES, like JAY Z says, “You betta cut the check” ha!

Jay Cal: Going a different direction, your experiences as NWA World Tag Team Champion afforded you lots of opportunities to perfect the style of tag team wrestling. But it wasn’t Joey Ryan or Adam Pearce on either side of you, but Nakanishi and Naito. Was it easy for you to adapt in the ring with them and was their a language barrier?

Machine Gun: There is definitely a language barrier. But the awesome part is that Nakanishi has been around for so long that he speaks great English. Honestly, I haven’t had any problems with communication

Jay Cal: How did it feel to stand toe to toe with the Giant, Bernard?

Machine Gun: Standing Toe to toe with Bernard was amazing. I watched Bernard on WWE TV when I was just a Freshman in college. Who knew I would be facing off with him 9 years later. The guy is amazing, and standing next to him made me realize how small I really am, he is HUGE

Jay Cal: The next night you faced Goto and Bernard again with Nakanishi. Were you able to parlay your tag team expertise with your experience from the night before in teaming with Nakanishi? 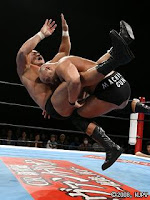 Machine Gun: Nakanishi has been great for me here in Japan. He has helped me a lot. It is a tradition to warm up and workout before the shows in New Japan with all of the boys. So, before the shows Nakanishi is always showing me and teaching me new things. His intensity and his emotion he shows in the ring is amazing

Jay Cal: Do you have any further plans to team with Nakanishi in the future?

Machine Gun: I have HUGE plans in New Japan, stay tuned, I promise to NOT disappoint!

Jay Cal: I look forward to hearing hat news. At the Yonago Convention Center, you faced your partner from the night before in Hirasawa with a crab hold. This is was your one on one win in Japan. How did the fans react to your victory?

Machine Gun: The fans have taken to me well in Japan, I think they are gonna really get into my character soon, I will be a JAPANESE IDOL!!!!

Machine Gun: What did it mean for you to walk away with your first victory in Japan?

Machine Gun: It was great, it is always good to get wins, cause that means there is plans for me here…. And that is the most important thing

Machine Gun: All the chemistry you built with Nakanishi, you faced him the next night. How was that to face a man you’ve been working with so closely?

Machine Gun: I was THIS close to beating Nakanishi! It was great to get in the ring with someone as famous as him, the people were behind him, and it allowed me to be the BAD GUY that I love being

Jay Cal: Anyone who’s seen you on the NWA Showcase would call you the MVP of the NWA. You recently debuted for New Japan on Samurai TV facing TNA Superstar Rhino. How was it to face the former NWA World Champion?

Machine Gun: I would call myself the MVP as well! Machine Gun MOST VALUABLE PLAYER BABY!!!! It was great to wrestle Rhino, he is an intense individual…. For anybody that see that match, know these facts; I worked that match after having SEVERE INTENSE DIARRHEA for 4 straight days! I hadn’t eaten ANYTHING for 3 days except ONE banana. ha, so my debut match on Samuri TV Machine Gun is about 10 pounds lighter than I normally am. I was sick as a dog

All in all man, Japan is amazing, and good things have happened. And I have great news, and when I am able to release it, you will be one of the first to know!

Jay Cal: Well I think I can speak for the NWA Family is saying that everyone here is proud of you and we can’t wait to see what is in store for the Machine Gun! Thanks for your time.

If you haven’t checked out Anderson’s 1st Interview, read it here.