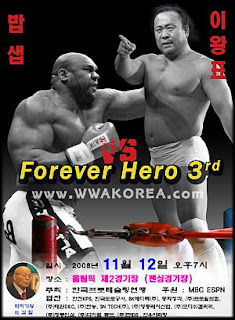 The National Wrestling Alliance is said to be the largest governing body in profesional wrestling. The NWA’s offices are represented in North America with promotions in the United States, Mexico, and Canada. There is also NWA Representation in Europe with NWA UK, NWA Ireland, and NWA France. The NWA’s reach stretches as far east as New Japan Pro Wrestling and the World Wrestling Alliance, the NWA’s Japanese and Korean memebers.
Although the connection between WWA and their American affiliate, Championship Wrestling from Florida seems a little suspect, it does look like the South Korean based profesional wrestling orginization is still promoting.
One of the last events of 2008 for WWA Korea was the battle between former IWGP Heavyweight Champion, and Kickboxer Bob Sapp. Sapp battled against WWA ace and reigning WWA Heavyweight Champion, Super Dragon. The results aren’t readily available, so if anyone speaks Korean or know where to find the results, I’d greatly appreciate it. The match was contested under MMA Rules.

::: Update :::
The Fans of Sherdog released the results of this match, with Super Dragon retaining his title.