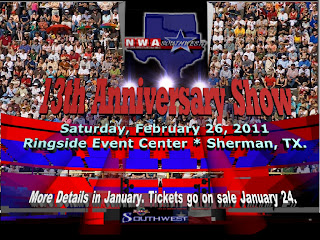 NWA Southwest commissioner Ken Taylor announced December 5, that Ringside Training & Event Center in Sherman, Texas, will host the 13th Anniversary Show. On Saturday, February 26, 2011.
“We had a good crowd response for Showdown in Sherman last month and now we anticipate 600 to 700 will gather for our 13th Anniversary Show,” said Taylor.
This will mark the first time in 8 years that the Anniversary Show has been held in North Texas. Taylor said the Anniversary Show is the biggest card of the year and several major belt matches will be involved. The anniversary date is just one day earlier than the first show in NWA-SW history held on February 27, 1998, in Dallas,
Tickets will go on sale at Dennard’s Western Wear in Sherman and Whitesboro, Texas starting January 24. Tickets will be $13 in advance and $15 at the door.