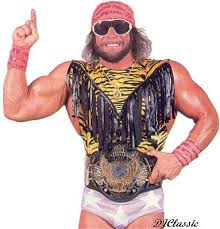 Macho Man will always be one of my favorites.  You can see how big of a star he was when the WWF and WCW were comfortable putting their World Title on him.  And when Macho Man jumped ship to WCW, it was Slim Jim who also jumped with their endorsement to WCW.

Macho Man was a pitchman, an actor, but most of all he was a legendary performer who inspired so many wrestlers.  Most of all, Macho Man walked away on his own terms.  When you see guys like Hulk Hogan or Ric Flair who are hoping to have that one last match, Savage knew when to walk away.  And because of that he’ll always be remember as an icon.

And some Quotes from Wrestlers on Randy Savage

PWG 2006, I had the valet, robe, cowboy hat, and sunglasses. Wasn’t hard to see who I patterned myself after  — Scorpio Sky

I probably wouldn’t be a wrestler without Macho Man Randy Savage. — Joey Ryan

The Macho Man helped mold my childhood into what I would do as an adult. It’s with a heavy heart I say goodbye. A TRUE icon & inspiration.  — Frankie Kazarian

The Macho Man helped mold my childhood into what I would do as an adult. It’s with a heavy heart I say goodbye. A TRUE icon & inspiration.  — Jay Lethal

RIP Randy “Macho Man” Savage – you were one of my childhood inspirations and heros. Strength, love and prayers to the Savage/Poffo family.  — The Rock