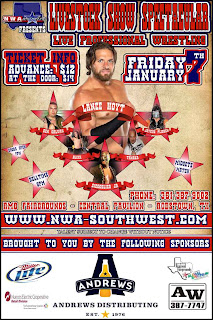 NWA Wrestling added to Livestock Show event
The world’s largest and oldest professional wrestling organization – National Wrestling Alliance Southwest – has been added to the front end of a week-long slate of events taking place at the 76th Annual Nueces County Livestock Show at RMB Regional Fairgrounds’ Central Pavilion in Robstown, Texas, on Friday, January 7.
Among the headliners appearing will be The Amazing Midgets Blixx and Justice, former TNA and WWE star Lance Hoyt, lucha libre star Sicodelico, Jr., former WWE wrestling legend Tanaka, the exotic Ann Dromeda, Jaykus “Biohazard” Plisken, Ben Galvan, Rudy Russo, Dick Dallas, Cody Jones, Jasper Davis, Ken Houston, Barbi, and many others!
The NWA Southwest road show is part of a major annual event in the Coastal Bend region of Texas next year. In addition to wrestling, the Livestock Show includes midway rides, carnival booths, 4H animal exhibits and judging events, cook-offs, parades, trade booths, and musical acts.
Recording artist Hilda Lamas will sing the national anthem at the show after the presentation of flags by the ROTC Color Guard.
Bell-time is 8 p.m. and doors will open at 7 p.m. Tickets only $12 in advance and now on sale at the Fairgrounds box office. Tickets can be ordered calling 361-387-9002. Tickets at the door will be $14.
For additional show information go to: http://www.nwa-southwest.com