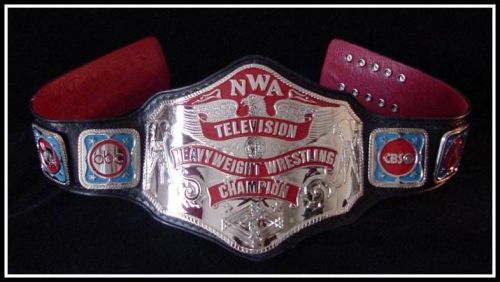 The Television Championship was reintroduced to the NWA at Into the Fire, by Stu Bennet. Over the course of the next three weeks, NWA POWERRR would host a series of qualifying matches that would have special stipulations leading up to NWA Hard Times, where they would crown a new NWA Television Champion.

The National Wrestling Alliance was purchased by Billy Corgan in May of 2017. Effective October 2nd 2017, the new ownership did not renew “licensees” that were established during the “Bruce Tharpe Era” of the NWA. Thus ending the longstanding “territory system” the NWA had in place. The NWA waited until their YouTube Series NWA POWERRR launched to reintroduce a television title.

The tournament would take place in Atlanta Georgia at the Georgia Public Broadcasting Studios on January 24th 2020. In the finals of the tournament Ricky Starks would pin Trevor Murdoch to become the inaugural Television Champion.

Unlike the National Championship, the NWA crowned the Television Champion by means of a eight man tournament. Each competitor was granted into the tournament by winning a qualifying match on NWA POWERRR. The qualification matches aired were a part of the Television tapings that followed NWA Into the Fire. The special stipulation for each of the qualifying matches were that the matches had a time limit of 6:05 (to celebrate the tradition of the time-slot made famous by the NWA).The elimination matches started On Episode 10 of NWA POWERRR, Zicky Dice defeated CW Anderson and Sal Rinauro. On Episode 11, Ricky Starks defeated Eddie Kingston and The Question Mark defeated Colt Cabana. On Episode 12, Tim Storm defeated Royce Isaacs. On Episode 13 Dice is tested again for a qualifying match with Caleb Konley. On Episode 14, Zane Dawson defeated his brother Dave Dawson. On Episode 15, Trevor Murdoch defeated Thomas Latimer. Lastly, due to the injury of Zane Dawson, a 15 Man Gauntlet would fill the last position when Ken Anderson outlasted Aron Stevens, Caleb Konley, Colt Cabana, CW Anderson, Dave Dawson, Jocephus, and Sal Rinauro. The last entrant would be a mystery opponent from Ring of Honor.

Starks would only hold the title physically for two days, but was recognized as champion for several weeks on NWA POWERRR.