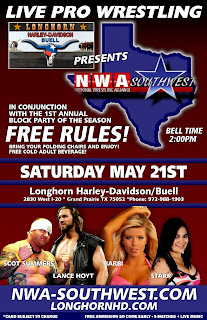 The National Wrestling Alliance (NWA) Southwest will present a FREE professional wrestling show on May 21st sponsored by Longhorn Harley Davidson in Grand Prairie. Bell-time 2 p.m.
Former WWE and TNA star Lance Hoyt will be defending his NWA Texas Heavyweight title against challenger Scot “Underground Icon” Summers in the main event. The card will also include two other title matches, plus a ladies match, and free beer will be served during the card followed by live music.
This event will mark the first free NWA show since Texas Motor Speedway sponsored in 2003. The Longhorn Harley Davidson dealership is located at 2830 West I-20 near 360.
For additional information, go to: nwa-southwest.com, or NWA Southwest Facebook.