In the pursuit of reclaiming the glory of the National Wrestling Alliance there has been one man who has captured the essence of the sport. His keen eye for photography and years of experience has captured images of Legends, Future Stars and World Champions. His roots firmly planted in the Southern California wrestling scene, Shane Michael Kidder’s passion has appeared on websites, event venue posters, in news papers and for a limited time will be available for purchase. I recently asked some questions to the man behind the lens, I hope you enjoy.
Jay Cal: Shane how did you get into the business of photographing wrestling?

Shane: It’s an interesting story, I think of my journey into the business of wrestling photography as of two acts. One where it was a hobby and second when it became a second career.

While working at the newspaper the story came out about a wrestler being attacked in his home in our area. While following the story, The promoter who was a news source in the story told my boss the wrestler was going to make an appearance at a wrestling show to discuss what happened. I asked if I could shoot it, and he said go ahead. I got the details from the promoter headed out to the show later that week, When I got there it turned out that he gave me the wrong date for the show. Later he called to let us know he was doing a benefit show for the wrestler. The paper decide to cover it, my boss asked me if I wanted to go with another photographer to cover the event; I jumped all over it. The night of that event I double check the date and the address, made sure we got to downtown LA in plenty of time. When we pulled up to the venue I knew something was wrong. Out on the street / parking lot all of the wrestlers and fans where milling around, It turns out that something happened with the building not being secured for the show, I have heard tons of rumors about what happened but I don’t want to speculate on it, the only thing I knew for certain is that there was noting going to be a show at this location. The promoter was sitting in his car, when we were told that the show was being moved to Anaheim. So the photographer and I decided to head out to the show, But we got there we were told that the show was canceled by the some of the wrestlers who also made the drive out.

I thought that was going to be the end, that I would never get a chance to shoot wrestling. But a few months later that changed.

A reporter found a flyer for a show that was going to be in Santa Clarita that he wanted to cover for the paper. My boss at the paper asked if I wanted to cover it for the paper with another photographer, I said sure. Needless to say that’s where I learned one of the most important thing about photographing wrestling; Watch the wrestlers at all times. This comes after almost being knocked completely out by a wrestler diving out of the ring at the show.

After this show I put a message out on a message board about shooting started contacting promoters and start to photograph as many groups as I could with no real focus, just a hobby to do on the weekends and that was it.

One person that I do have to thank when I first started was Paul T. He helped me get into PWG to shoot their shows which are a blast and still enjoy photographing today.

One of the first promoters I met told me that there is no money in wrestling, at the same time asking me to drive up 6 hours to his show where he may or may not give me gas money. And to be honest that just soured me on the whole thing and almost walked away from it, as a hobby this was done.

Enter David Marquez; It was towards the end where I was just getting feeling rundown about wrestling with a few exception I decided that I want to give shooting UPW a shot before I called it quits. I posted it on the message board again, and Dave responded. We met at a PWG Show and talked wrestling for a few hours before the show and before I knew it I was working for him at NJPW. He’s flown me all over the country to photograph NWA events . I can honestly say it wasn’t for him I would have been out of this business a long time ago. He’s been a great mentor and friend and helped me make this a second career.

Jay Cal: You could be one of the most recognizable faces in the Southern California wrestling scene, who has never performed in the ring. How many wrestling promotions have you worked for?

Shane: I think it’s been about 19 or 20 I’ve photographed at this time if you

don’t count the NWA Anniversary show a few years back where all the NWA promotions put on a match; 53 matches I think over a three day weekend. So let see there was GSCW, REV PRO, APW-LA, PCW, SCCW, BATTLEGROUND, WAR, XPW,NJPW, UPW, Lucha VaVoom, another lucha group I can’t remember the name to, and more recently WWE, WSX, PWG, NWA Pro/AWS, NWA Pro/Socal Pro, NWA Pro/Mach 1, NWA Pro/EWF, NWA PRO as you can tell NWA PRO is a big part of my career.

Jay Cal: What are some of your most favorite pieces of work? Which picture or graphic has been your favorite? 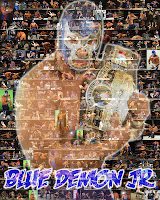 Shane: This is a great question… On the wrestling graphics side I’m really proud of the Joey Ryan and Blue Demon jr. NWA photo collage posters I just finished. They are a lot of work to do but they look great, There’s a poster that I’m updating of Blue Demon Jr. vs Adam Pearce that I’ll be putting up soon that I really like. There’s a few photos from an FHM Magazine Shoot I did a few years ago of PWG that I really like, mostly posed shots. I used a few in the Joey Ryan Poster. There’s a several from a show in Corpus Christi that I think is some of my best work ever. The lighting was perfect, the action was great, they just turned out awesome. There’s a series of backstage headshots that I did for the NWA that are also great. There is also a whole series of candids that I did on the Texas tours a few years ago that are some of my all time favorite photos that I hope to collect into a book some day. It involves get guys to do the young buck pose in various locations. I was able to get the Laredo Hockey team mascot to even do it. It was great.

Jay Cal: What was your favorite event you got to photograph.

Shane: This is kind of hard for me to answer, I tend to zone when I’m shooting so I really don’t remember the actual event. It dives my friends insane. I enjoyed the 57th NWA Anniversary weekend, even though it caused me to lose my hearing in my right ear for a few months. I still blame waffle house…hahahahaha. I also have so many great stories and made so many friends that weekend, it made me realize that I was doing the right thing staying active in wrestling. It was also the first event that someone actually flew me out to which was awesome. The Texas tours have always been a blast for me also. Though one of my favorite wrestling related thing to photograph is when ever the NWA goes to Disneyland . It’s just awesome to shoot and watch people who have never been there, they have the best reactions to the park.

Jay Cal: Shane, thanks for your time. If anyone is interested in purchasing any of the prints, please check out SlamsPhotos.com for these exclusive prints. These are limited prints, 8 x 10 prints for $10 and 16 x 20 prints for $20. There will also be a link on the The Alliance Blog.