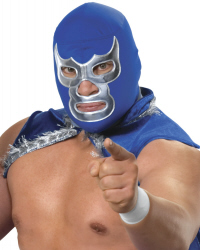 We’re extremely happy to announce that Mexican luchador Blue Demon Jr., the current NWA World champion, has just signed on for the February 14 kickoff of NWA: New Beginnings! in Charlotte.

The son of Blue Demon (an icon in Mexican wrestling and culture,) making his first-ever appearance in North Carolina, will defend his championship belt against a yet-to-be-named opponent.

Click here for some background information on Blue Demon, Jr., the first Mexican and first masked luchador to hold the NWA World championship.

“Scrap Iron” Adam Pearce, himself a former NWA World champion and current booker for Ring of Honor, has signed on as challenger for Shatter’s National championship, but one has to wonder if his sights aren’t still set on Blue Demon, Jr. as well.

Pearce is still protesting his October 25, 2008 title loss in Mexico City, when he passed out from Blue Demon Jr.’s Single-leg Boston crab. The video of the match, which you can see in the right column below, clearly shows Pearce’s right arm was under the bottom rope, yet the referee’s decision to stop the match was allowed to stand.

NWA: New Beginnings! is happy to add to the mix these two world-class athletes — and two championship matches — to our huge lineup Sunday afternoon, February 14!