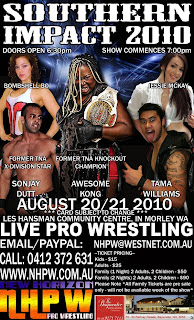 NWA DAWG’s Sonjay Dutt and NWA Hollywood’s Awesome Kong wrestled in Perth, Australia this past weekend for New Horizon Pro Wrestling’s Southern Impact 2010 shows. These were the only shows Kong did while in the country. Dutt competed for the NHPW Art of Fighting Championship on both nights, while Kong challenged for the NHPW IndyGurlz Australian Championship on the first night and took part in a six person tag match on the second night.

For full results please see the Live Events section on the message board.