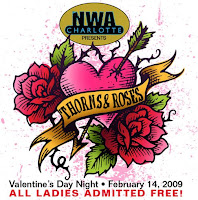 NWA Charlotte is offering up a second helping of Mid-Atlantic goodness on Valentine’s Day. The first show featured NWA National Champion defend his title against long-time nemesis Mikal Judas. In keeping with this new tradition, NWA Women’s World Champion MsChif takes on long-time nemesis Awesome Kong. Kong and ‘Chiff have battled over titles in NWA Midwest, Shimmer, and the World Championship. Many believed it to be a fluke when Kong lost the title. Since then Kong went on to dominate the Knockout Division of TNA. And MsChif has dominated the ladies of the NWA.
Also the return bout between Ivan Koloff and his nephew Nikita versus The Barbarian and his agent Jeff G. Bailey in a no disqualification match, with the Legends Championship on the line. Also to check out a piece that the local Fox affiliate did on with Ryan O’Reily and NWA Charlotte.