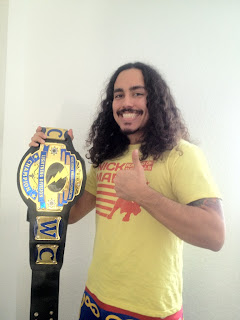 Nick Madrid walked into Survival Games IV for two reasons, to win his first championship belt and to lead his team to victory and to become $10,000 dollars richer.
Nick Madrid, who was recently on Talk NWA, squared off against Reigning Lightning Division Champion Jonas Albert Robinson, a man Madrid is all too familiar with.  Aside from their last encounter when Madrid defeated Robinson via a disqualification the two have a well documented history.  It is a known fact that Nick Madrid trained at the Storm Wrestling Academy.  So did Robinson.  The duo had trained together while under the tutelage of Lance Storm and even room mates.
Madrid would tweet “Won my first Title almost 2 years to the day I finished training with [Lance Storm]!”  He would later post on his facebook “Thank you to everyone who has supported me since day 1. I’ll smell the roses later. Now onto business.”  When I asked him what’s next his response, “I’m going to Disneyland.”
A feather in the cap of the new champion would be that Team Madrid would win Survival Games IV and the  $10,000 Cash Price.  Also Love, American Style (Freddy Bravo and Loverboy Nate Andrews) won the WC-WC Tag Titles.