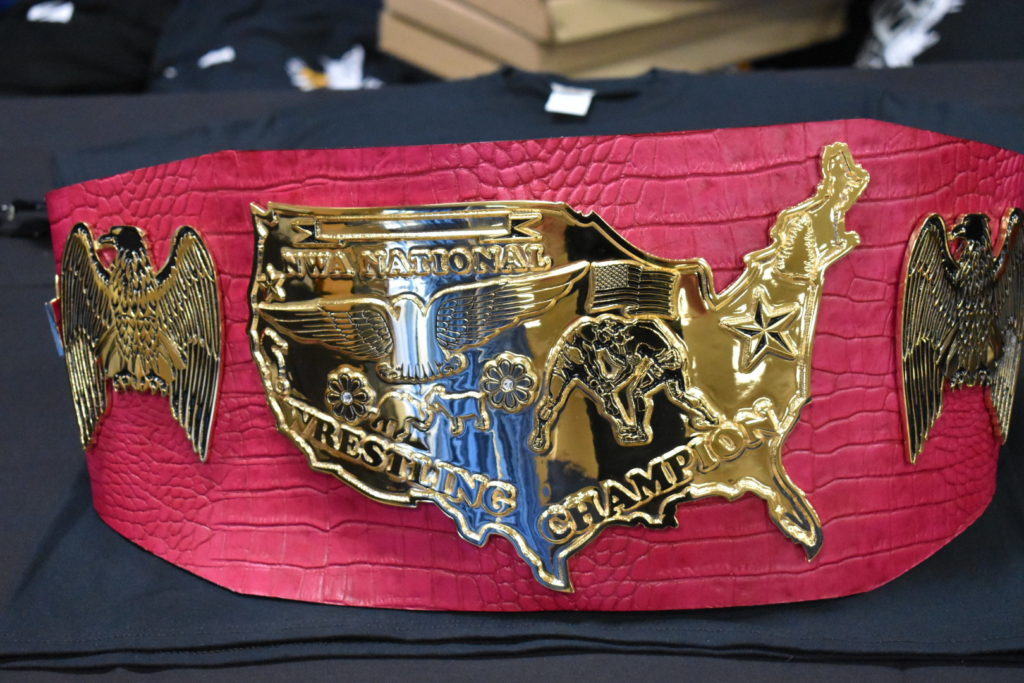 The NWA National Heavyweight Championship was re-established on October 21st 2018 as part of the NWA 70th Anniversary Show in Nashville Tennessee. The unique match stipulations set up for an interesting contest. Consisting of two different four-man elimination matches, the winners of these matches would be placed into a one-on-one match to fill the vacant championship.

The National Wrestling Alliance as purchased by Billy Corgan in May of 2017. Effective October 2nd 2017, the new ownership did not renew “licensees” that were established during the “Bruce Tharpe Era” of the NWA. Thus ending the longstanding “territory system” the NWA had in place. Also the NWA sealed the title history of World Woman’s Championship and World Junior Heavyweight Championship, stripped all remaining NWA Champions including; World Tag Team Champions, North American Champion, and National Champion.

Sam Shaw, Colt Cabana, Sammy Guevara and Scorpio Sky made up the participants in the first qualifying match. Shaw would eliminate Cabana. Sky would eliminate Guevara. Shaw would lastly eliminate Sky. The other bracket would consist of Willie Mack, Jay Bradley, Parrow, and Ricky Starks. Starks eliminated Parrow, followed by Mack eliminating Jay Bradley, and lastly Mack eliminating Starks. Mack would then square off against Sam Shaw and would leave Nashville as National Heavyweight Champion.

Wille Mack would lose the NWA National Championship to Colt Cabana on April 27th in Concord, North Carolina as part of the 2019 Crockett Cup. Shortly after his defeat, it was announced that Willie Mack had singed with Impact Wrestling. After Cabana’s victory he was met by James Storm who challenged Cabana for a title shot. Cabana defended the title several times, most of which were featured in Ring of Honor. James Storm would win the National Championship from Cabana on a Ring of Honor Darkmatch that lead into the NWA POWERRR. The feud between Cabana and Storm would spill over from ROH into the NWA with a war of words on POWERRR that led to a match stipulation that if Storm flanked by the Wild Cards could defeat Nick Aldis, Ken Anderson, and Cabana that Storm would get to wrestle Aldis at the Into the Fire for the Worlds Heavyweight Championship, but if he lost, he’d have to face Cabana in a rematch for the National Championship. Cabana scored the pin fall on Latimer to secure his re-match.

Cabana’s reign as champion again wouldn’t last long. Aron Stevens was able to interject himself into the title match with Starks and Cabana at Into the Fire. Stevens was able to sneak his way into the match and was able to sneak out of that match as champion. Starks would go on to win the NWA Television Championship, while Cabana quietly exited the company. Stevens would then begin his feud with Trevor Murdoch. The pair would become entangled with the expectation that the feud would be settled at the 2020 Crockett Cup. Nevertheless, on September 29th Murdoch defeated Stevens for the National Heavyweight Championship on United Wrestling Network’s Prime Time Live, in Long Beach California.