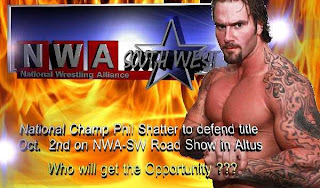 The National Wrestling Alliance’s National Title has a strong history in the state of Texas.  Since 1997 two very proud representatives from NWA Southwest have been National Champion.  Former NWA Southwest Texas Champion Kevin Northcutt proudly wore the National Title multiple times.  The man who beat Northcutt for the National Championship, Hotstuff Hernandez even traveled to Japan to defend the title against Shinya Hashimoto.  Both former Texas Heavyweight Champions went on to become the National Champions.  And on October 2nd for the NWA Southwest Road Show in Altus, Texas, the NWA National Heavyweight Championship returns to Texas.  And Phil Shatter in the same vein as Northcutt and Hernandez is powerful.  Shatter has had successful defenses against the likes of Caprice Coleman, Ace Rockwell, Gary Valiant, Truitt Fields, Orion Bishop, and event reinging NWA Worlds Champion Adam Pearce.  Shatter will make his first venture into the state of Texas coming off a heartbreaking loss his opportunity at the NWA World Championship with Adam Pearce at the NWA Legends Fan Fest, when the North American Champion attacked both Pearce and Shatter in the main event.

Which lucky NWA Southwest Superstar will get their opportunity at the National Championship?  Will it be NWA Texas Champion the “Largedor” Michael Faith?  Former Texas Champion Chad Thomas?  Maybe NWA-SW/WOW Champion Blue Demon Jr. or a new opponent all together.  Only time will tell.  But Phil Shatter might just find out that every thing is BIGGER in TEXAS.