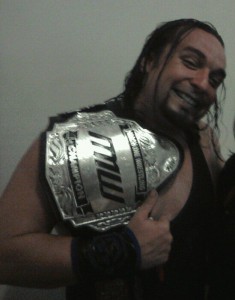 Since overcoming all odds and defeating James Morgan to become the M1W Champ, Matthews has had to look over his shoulder as the opportunistic and seemingly jealous Webb utilized every chance he got to further damage Matthew’s injured arm. After several sneak attacks and cheap shots, Webb finally gets what he claims has been unjustly kept from him; a chance to become M1W Champion, while Matthews finally gets his hands on the man who has made his life Hell for months. Will the Best Streak Ever continue, or will the Eternal Opportunist’s implausible rise finally come to a halt?

Famous B vs. Cedric the Hitman

Famous B took “Friday Fight Night” by storm, riding an impressive undefeated streak that saw him quickly become one of the most popular performers at the M1W Arena. B’s success landed him squarely in the sights of Cedric the Hitman, who not only caused that streak to end, but set out to sabotage every match Famous B would have from then on. Cedric seem intent on using everything in his bag of tricks to fall the Shooting Star, while B will be dead set on making Cedric famous.

Following the unfortunate announcement that James Morgan would be unable to compete due to injury, phones at the M1W offices blew up with hopefuls looking to fill the spot. One of those calls, however, came from an unlikely source, Percy Pringle III, who made a strong case for his man to get the nod. After establishing himself as a perennial tag team champion, Ricker will look to use Madrid as a stepping stone to position himself in the M1W Championship scene, while Madrid will seek to end this incarnation of the Pringle Dynasty before it’s even began.

Ridiculously Bigg vs. Anchors Away vs. Blaze & Rozay vs. Todd Chandler & DYNAMICO!

For months, tag teams have formed in and flocked to Anaheim where the most robust tag team wrestling scene on the West coast has been heating up with suitors looking for a chance to dethrone The Tribe. Ridiculously Bigg has proven that opposites attract, Blaze & Rozay have worked to carve their niche since departing the Cole-ition, Anchors Away feel perpetually overlooked, and the team of Chandler and DYNAMICO! Have proven to be an odd, if successful pairing. Which team will get the shot at the NWA Heritage Tag Team Champions is anyone’s guess.

Watts has vowed that he will be in Long Beach come Hell or high water. As paperwork gets shuffled and red tape sorted through, “Big Nasty” hopes that the NWA Board of Directors and M1W brass will be able to come to a resolution regarding the suspension and pending reinstatement of Andrew Hellman. One thing’s for sure, whether it be Hellman or someone else, the Murder Train pulls into Long Beach Comic-Con October 29th!

It all takes place Saturday, October 29th, 5:00 p.m. bell time at the Long Beach Comic-Con, live from the Long Beach Convention Center. Show admission is free on the exhibit floor with purchase of your LBCC pass ($25/day, $45/weekend. Student/Military/Senior discounts available), which can be ordered here: http://shop.longbeachcomiccon.com/ or purchased on site.