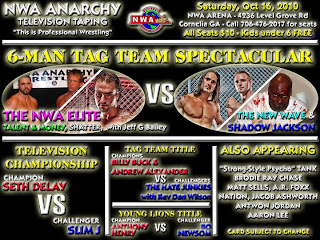 It’s not exactly Gordon at 6:05, but NWA Anarchy continues to thrive down in Georgia. If you want a good, solid, southern-style promotion, you need look no further than NWA Anarchy, and you need not look past Saturday night. In what will be the last show to build-up for their traditional Fright Night event on October 30th, Jerry’s crew is going to try to wet the pallet and drum up some business in the Church of Southern Wrestling for the show.  The show this Saturday, remember it’s the all important build up to Fright Night, is headlined by the NWA Elite faction consisting of NWA National champ Phil Shatter, who is awesome when he is not being Mulkey-ed out as TNA Security, and Talent and Money, who are not too shabby of a paring in the Australian Tag Rules side of things. Across the ring in opposition is the team of The New Wave, who are very exciting and a very clean and cohesive team in their own right, and the man who elicits memories of ‘The Dweeem’, Shadow Jackson.
If the show that took place on October the 2nd are any indication, this Saturday’s show should be plenty good enough to achieve the desired build-up they are looking for. I remember when promotions used to build up shows and seemed to have a point…sigh..
The under card of the show  looks pretty solid as well. The NWA Anarchy tag titles will be defended with the underlying question being can the champs get along together? Current champs Billy Buck and Andrew Alexander have been shown to bicker and argue often as well as questioning each others abilities in the ring( see the 10/2 show for an example). On this night, they will be defending against The Hate Junkies, from the stable led by, in my opinion, someone who has truly kept the lost art of manager alive, Dan Wilson. It’s always a good time when Wilson is involved with any angle, so with him in th emix and the underlying issues with the champs, this match should tell a great story in furthering the conflict here, remember don’t look for a resolution on Saturday in this one, gotta’ build for Fright Night! The TV Title will be defended with champ Slim J, it might be time to drop the Eminem schtick, taking on Seth Delay. Once again, both have shown they are enjoyable to watch in the ring, and in case you don’t know, almost the entire roster is great on the mic telling stories. a side note about the TV title, it does this heart good every time I see the strap, they use a version of the old red strap from the JCP days.
The Young Lions title is also going to be on the line as champ Anthony Henry takes on Bo Newsome. This division is where the youngsters get a chance to shine, and it sort of like a poor-man’s version of the early X-Division, and any given night in Cornelia can steal the show. No Anarchy title defense from Judas this night, but Tank, Brodie Ray Chase, Matt Sells, and Nation round out the bottom of the card. Keep your eyes on Nation, he has potential to be the best Heel in the promotion given some more seasoning, but I have to say that Seth Delay is a pretty darn good heel.
At 10 bucks you can’t hardly beat it, and if you are in the area I suggest you check it out. If you are not in driving distance, check em; out anyway you can, if you have a hankering for some stuff that you can’t get from some of the other stuff on tv, you won’t be disappointed!