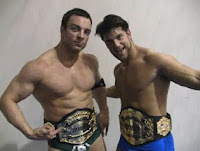 Some call him Uncle Paul, some call him Paul Bearer, I’ll just call him Percy Pringle.  And good ole Percy has found his way back into managing.  Pringle infamously managed the Undertaker to more than a few championships.  And now, Pringle is building a faction in the NWA.  Already signed to the Pringle Dynasty are Shaun Ricker and Brian Cage… Natural Selection.  If you don’t know Natural Selection yet, don’t worry about it, Percy Pringle is planning to change all of that.  Prior to joining up with Pringle, the duo were NWA M1W Heritage Champions.  That is until they lost the belts to team of Johnny Yuma and Johnny Goodtime,  the RockNES Monsters.  At the Showcase on May 22nd, Pringle managed his Dynasty against the tag team of Joey Ryan and Willie Mack.  Bested that night, Pringle has already ensured that his guys will be working the Showcase Events in Oceanside, Yuma, and San Bernadino on the 25th, 26th, and 27th of June and pursuing NWA gold.

A closer look at Eli Drake

Undefeated in the UK