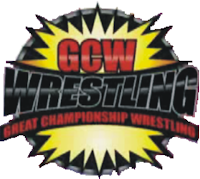 Not to be confused with GCW Pro which operates in Alabama and is not affiliated with the NWA, Great Championship Wrestling is based I Georgia. It uses a lot of former NWA Wildside. Wrestlers like Bull Buchanan, David Young, Sonny Siaki, and Johnny Swinger, who holds their heavyweight titles. GCW runs about once a week. I don’t know if this google video is a one time deal or if they will be airing a series of episodes. From my understanding, Swinger is in an alliance with manager/color commentator Quinten Michaels and his other man Zero Tolerance. Bull Buchanan and David Young have battled with the champion Swinger in failing efforts to take the title away. There is also the Interstate Champion, who has had a series of victorious defenses in the last month.
Check out this show; David Young versus Orion Bishop, Skinny Jimmy versus Zero Tolerance, andGCW Tag Team Championship match: Hot Like Lava vs. Tex Monroe and J-Rod.