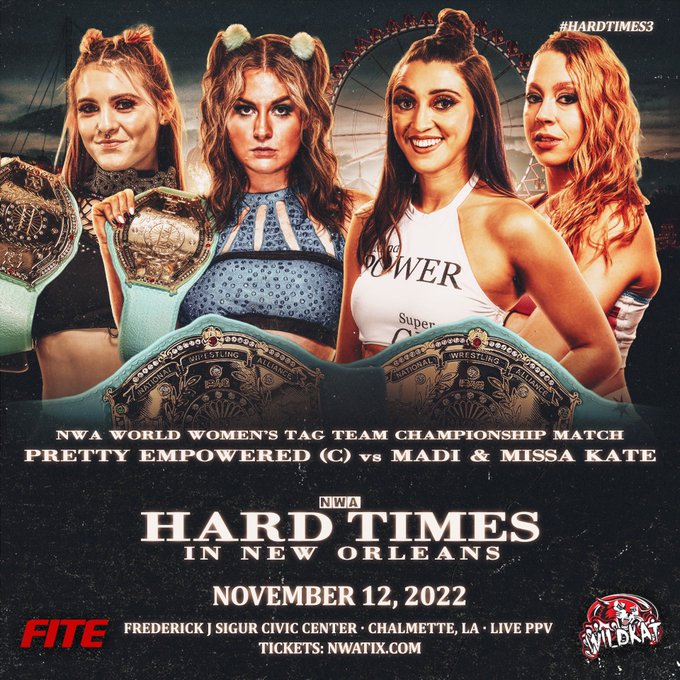 The makeshift tag team of Missa Kate and Madi impressed the front office when they defeated Pretty Empower in a non-title match on NWA USA. Missa Kate has struggled to make her mark in the NWA. She’s had multiple partners since debuting in the Women’s Division, but with little to no success. In the past, she has teamed with Natalia Markova, Kamille, KiLynn King, Jennacide, and Kaci Lennox. Likewise, Madi hadn’t really found her spot on the roster. Filling in multiple roles both as a singles competitor and in tag teams. It wasn’t until the Queen Bee match at the NWA 74 that put Kate and Madi on the same team. Madi and Missa would go on to lose to Natalia Markova in the Queen Bee, but that would set up the foundation for the two to work together. When they defeated Ella Envy and Kenzie Paige on NWA USA.

Pretty Empowered actually started their career as a tag team outside of the NWA. Ella Envy and Kenzie Paige teamed together in New South, even winning their tag team titles. They would go on to lose them to the Wasteland War Party. But as a team in the NWA, Paige and Envy were given a golden opportunity at the Crockett Cup 2022, but couldn’t pull off the victory. However, Pretty Empowered were able to best The Hex for the Women’s Tag Team Championship at Alwayz Ready. The pair even retained in a Street Fight at the 74th Anniversary against the former champions. Since then they have defeated Hayley Shadows and Jaylee. This will be their only 2nd title defense