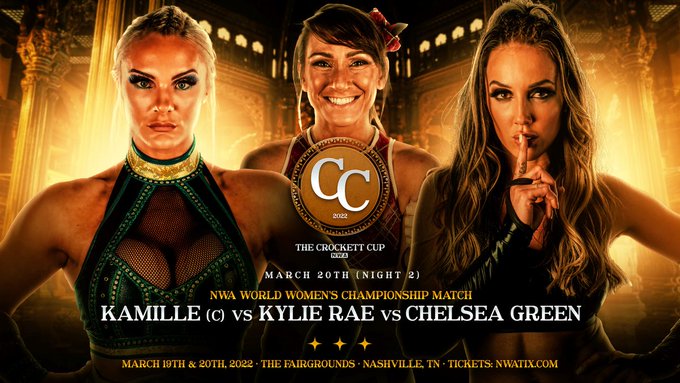 The odds are definitely stacked against the Women’s World Champion Kamille. Since the moment she’s stepped into the ring, every single woman in the locker room was gunning for her. Undefeated in titles matches Kamille has to best Thunder Rosa, just to get a shot at the former champion Serena Deeb. The Brickhouse hasn’t looked back since. With a body count heading north of 25 since joining the NWA, the Women’s World Champion will have to face two, great opponents at Crockett Cup.

Kylie Rae just might be the future of Women’s Wrestling, she’s struggled to stay focused in the NWA. Most recently teaming with Tootie Lynn Ramsey, Rae has had many victories both in singles and tag team competition. But has yet to have a one-on-one match with the woman who wears the Burke.

Chelsea Green is the wild card in all of this. She didn’t deserve to be in this title match. She was soundly defeated by the Brickhouse at the 73rd Anniversary Show. Also she recently injured her wrist, again, this time in Impact wrestling. No telling what kind of role she will play in this match.