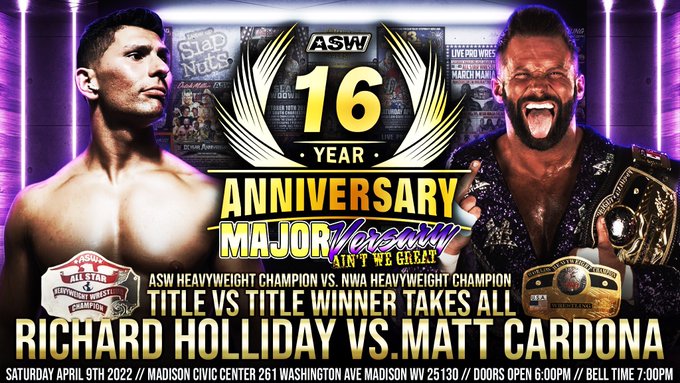 Davey Richards returned to wrestling in 2021 after a 4-year break. Before his break, Richards wrestled all over the world. He has been a World Champion in ROH, PWG, and CZW and has held dozens of tag team titles across the world. Richards signed a contract with MLW in 2021 and recently extended his deal with them. There is no doubt that Richards is worthy of a Worlds Heavyweight Championship match with Matt Cardona. Davey Richards captured the All-Star Wrestling Championship on June 5th, 2021.
For his part, Matt Cardona has taken the internet by storm. The self-proclaimed Internet Champion, Cardona has done his fair share of title collecting. He currently holds the Impact Digital Media Championship. He is also the AIW Absolute and AIW Intense Champion. He still carries the NYWC Heavyweight Championship. And his successful NWA Worlds Heavyweight title defense at the Crockett Cup is still being talked about by NWA Fans.
Both titles are on the line.
Breaking News… Davey Richards will not be in action Saturday Night, April 9th. Replacing him in the match will be Richard Holliday.  Holliday is also signed to Major League Wrestling and defeated Davey Richards on March 31st, 2022 at MLW Intimidation Games. He had recently returned to the promotion and turned on his long-time friend Alexander Hammerstone.