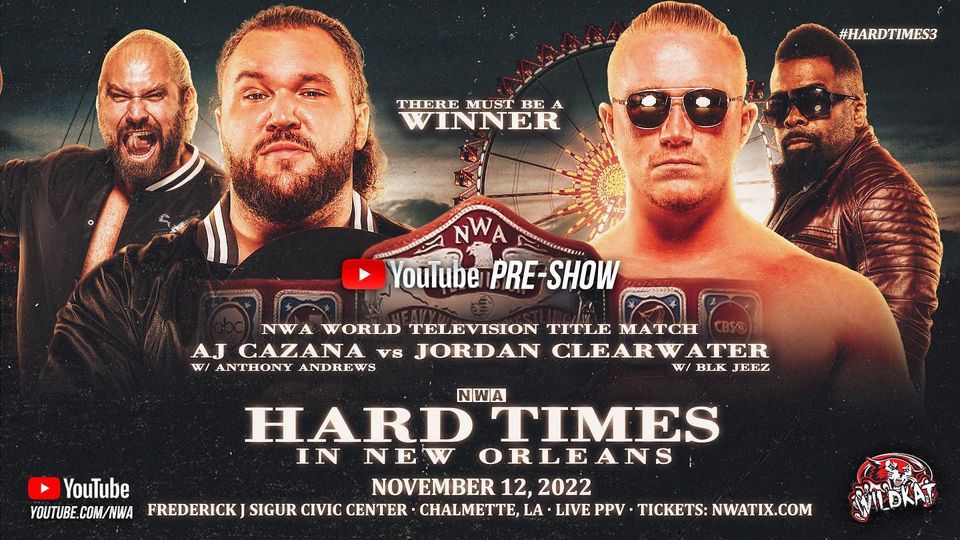 When Tyrus cashed in his Lucky Seven Series to challenge for the NWA Worlds Heavyweight Championship, it created a vacancy for the NWA Television Champion. Ricky Starks defeated Matt Cross, Tim Storm, and Trevor Murdoch to become the inaugural Lightning One Era Champion at the first Hard Times. Since then, four men have held that championship. Tyrus held the championship for 414 days having defeated Pope to win the title.

Jordan Clearwater and AJ Cazana have stood across the ring multiple times. At the 74th Anniversary Show, Cazana and Anthony Andrews would defeat Clearwater and Marshe Rockett. The two wouldn’t lock horns again until the finals of the TV Title Match. Cazana landed in the Elimination Qualifier Match against Anthony Mayweather, Jax Dane, Marshe Rockett, and Ricky Morton. Cazana pinned Ricky Morton to end the match. Likewise, Clearwater found himself in the ring for his Qualifier Elimination Match against Max The Impaler, Rush Freeman, Da Pope, and Caprice Coleman. Clearwater was able to beat Coleman to advance. Clearwater and Cazana went to the limit without crowning a new champion. The NWA decided to redo the match at Hard Times 3. There must be a winner.