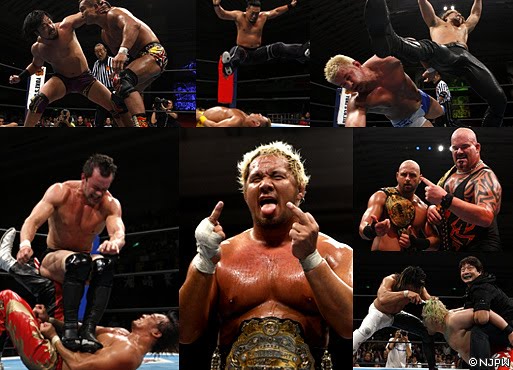 NJPW “DOMINION 6.19″, 6/19/10 (WPW/PPV)
Osaka Prefectural Gymnasium
5,500 Fans – Super No Vacancy
1. Koji Kanemoto, El Samurai & AKIRA beat Super Strong Machine, Ryusuke Taguchi & Tama Tonga (8:48) when Samurai used a la magistral on Tonga.
2. Takashi Iizuka, Tomohiro Ishii & Gedo beat Manabu Nakanishi, Mitsuhide Hirasawa & KUSHIDA (9:24) when Iizuka used a sleeper hold on KUSHIDA.
3. GBH vs. NOAH Special Singles Match: Mohammed Yone Pro Wrestling NOAH beat Tomoaki Honma (8:58) with a muscle buster.
4. Shinsuke Nakamura Return Match: Shinsuke Nakamura beat Daniel Puder (4:41) with the Boma Ye.
5. Special Singles Match: Hirooki Goto beat Masato Tanaka ZERO1 (13:39) with the Shouten.
6. IWGP Tag Team Title – 3WAY Elimination Match: Giant Bernard & Karl Anderson beat Yuji Nagata & Wataru Inoue (c) and Yujiro Takahashi & Tetsuya Naito (18:24). Nagata used a backdrop hold on Naito. Anderson used the Gun Stun on Inoue to become the 57th champions.
7. IWGP Jr. Heavyweight Title: Prince Devitt beat Naomichi Marufuji Pro Wrestling NOAH (c) (20:20) with an avalanche-style Bloody Sunday to become the 60th champion.
8. Hair vs. Hair Match: Hiroshi Tanahashi beat Toru Yano (12:54) with a crucifix hold.
9. IWGP Heavyweight Title: Togi Makabe (c) beat Go Shiozaki Pro Wrestling NOAH (20:40) with a top rope King Kong kneedrop (1st defense).
* Show was said to have been incredible with some going as far as to call it one of the best in years by New Japan.
* Makabe surpassed the V1 hurdle where many have failed, pinning NOAH’s young ace Shiozaki. Makabe appeared legitimately hurt early on and the match took a while to get going, but became good and the IWGP Heavyweight Champion sent Shiozaki home with nothing. Makabe nominated Nakamura, who has a “rematch right”, as his pre-G1 challenger on the big Sapporo show next month. Makabe called Devitt out also after the match to enjoy the moment with him, the two having downed NOAH opposition.
* Tanahashi defeated Yano in the Hair vs. Hair match to take Yano’s hair, but Iizuka arrived to cause trouble. KUSHIDA, who has been at odds with CHAOS, arrived to help Tanahashi but it took the surprise appearance of KUSHIDA’s teacher TAJIRI to make a difference. He misted Yano and Iizuka, before shaking hands with Tanahashi and liquidating their old grudge! Tanahashi may appear on some of TAJIRI’s SMASH shows in future.
* Prince Devitt ascended to the top of the junior world, following up on his Best of the Super Jr. tournament win by beating the previously unbeatable Naomichi Marufuji to bring the IWGP Jr. Heavyweight Title back home after half a year in Marufuji’s hands! This was said to have been a tremendous match with Devitt showing his growth and completing his climb to the top of the junior ladder.
* Nagata & Wataru showed off brand new IWGP Tag Team Title belts before the show. However, they were unable to hold on to them as Bad Intentions finally captured the gold, Anderson pinning Wataru to win his first title. There were signs of dissension with NO LIMIT, a split between Takahashi and Naito hinted at.
* The long running Hirooki Goto vs. Masato Tanaka feud appears to have ended with Goto winning what seems to have been the decisive match after they were tied. This was said to have been excellent and this whole feud has helped Goto grow as a wrestler.
* Shinsuke Nakamura returned from injury and defeated controversial fighter Daniel Puder in short time. The talking point was the appearance of Simon Inoki and Atsushi Sawada of IGF, who appeared and seemed to eye up Nakamura, potentially reigniting the New Japan vs. IGF situation that never really began last year.