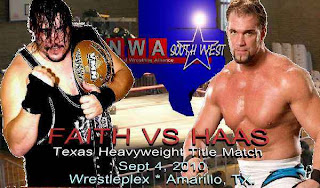 Two-time NWA Texas Champion Michael ‘The Largeador” Faith will make his first title defense September 4 versus the challenge of former WWE star Charlie Haas at NWA-SW’s Panhandle Wrestling affiliate in Amarillo, Texas.
Faith, who weighs 340 pounds, is one of the biggest wrestlers in Texas but extremely agile for his size. He is so agile he has toured Japan many times over the past two years as an American beast. He defeated the Texas legend Kevin Northcutt in 2009, and just recently Chad Thomas who won a match over Lance Cade in his final NWA appearance.
Cade was suppose to get a Texas title shot but passed away before the opportunity so his close friend Haas said he will win for both of them in Amarillo. “I don’t care how big Faith…..he has what belongs to us (Cade) and I am coming for it.”
Faith had been aiming at match with Cade for over three months, but said in all due respect he would have beat him had the match ever taken place. “Cade would have been a great match between two big heavyweights but as for Haas I got 80 pounds on him. He couldn’t even beat Adam Pearce….enough said!”
NWA-SW promoter Ken Taylor said championship matches like this one is what old school NWA wrestling is all about.