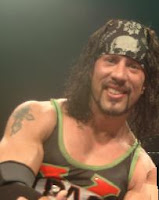 According James Caldwell of the PWTorch, it seems that Sean Waltman had checked into a treatment facility, under the program that the WWE had setup for wrestlers who previously worked for their company. Waltman prior to checking in for treatment has been sharing time between AAA and NWA Pro. Waltman in the PWTorch article was quoted as saying “I’m fine actually. I’m going to get my knee fixed while I’m out.”
Waltman had been making a big impact in both the AAA and NWA Pro in very different roles. In AAA Waltman is a Rudo, teaming with the Legionaires, which is more or less a heel stable headed by Konnan that features talent from the United States. And for NWA Pro is quite the opposite as one of the major oppositions to Adam Pearce, the Real American Heroes, and even won a match over Bryan Danielson in Australia. Waltman had also previously wrestled Adam Pearce for the World Title in 2007 and I expect that when he is 100% he will face “Scrap Iron” another time to face off for the World Title.