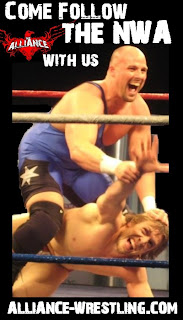 When it comes to the sport of professional wrestling very few names ever reach the pinnacle of World Champion. And to win a Worlds Championship twice means you have to be twice as good as your competition. The “Scrap Iron” Adam Pearce, who defended the title all over the United States and Mexico, is looking to re-gain a title he is convinced, he never lost. Adam Pearce will be my special guest on a one night only Thursday Night edition of Alliance-Wrestling Radio. We’ll be talking to Pearce about his career, his time as NWA Heritage Champion, his new NWA British Commonwealth Championship, his time as NWA World Champion and his match this Sunday March 14th for NWA New Beginnings where Pearce will challenge Blue Demon Jr., along with Phil Shatter in a Three Way Dance for the NWA Worlds Heavyweight Championship.

Come listen to the show at