Skip to content
It is on good authority that a new challenger has made his wishes known to the front office of NWA On Fire. Brian Webster reports on his weekly column Webster’s Weekly

“Some very exciting things are happening on a daily basis. I have received word that Lance Cade is making his way to NWA On Fire. I understand that Mr. Cade is setting his sights on becoming the NWA North American Champion and will travel anywhere for a shot at Apollo.” 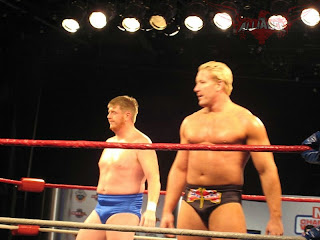 Apollo is no slouch, although his only title defense comes from the debut NWA NJ show on June 27th. He challenged Mike DiBiase for the North American Heavyweight Championship back in April at the NWA Showcase Television Tapings. The NWA On-Fire Heavyweight Champion defeated DiBiase for the title in Tyler Texas at the Striking Gold Event. Lance Cade however missed the events in Tyler Texas because his prior bookings in Japan with Hustle. Cade and his partner Murdock was pursuing the World Tag Team Champions Skull Krushers. But with Murdock working a regular schedule in Total Non-Stop Action, it appears that Cade will be going solo and he will be pursuing Apollo. One thing is for sure, these two giants will go all out for the North American Crown.